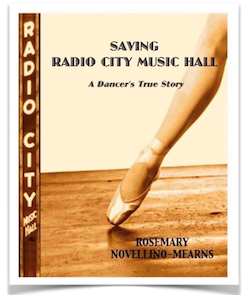 In constant demand for appearances and book signings to promote her acclaimed memoir Saving Radio City Music Hall: A Dancer's True Story, Rosemary Novellino-Mearns was invited by the American Cinematheque in Los Angeles, to share her extraordinary experience at Grauman's Egyptian Theater in Hollywood, itself a landmark of historic preservation. As a result of the Hollywood presentation, Rosemary is featured in the award winning documentary Going Attractions: The Definitive Story of The Movie Palace which premier in 2019.

Novellino-Mearns’ multimedia documentary style presentation has been seen nationwide from the Art Deco Society of Los Angeles, to the Brand Library in Glendale, CA to Provincetown, on Cape Cod, MA. Sold-out engagements in New York City include the world famous theatrical club The Lambs, The Coffee House Club, and The Dutch Treat Club at The Players. 2020 will find her speaking at the Yale Club and Lotos Club in New York City and Long Island University and M!olloy College have also extended invitations to hear her motivational story.

Libraries, club organizations and dance schools in her native state of New Jersey, as well as Philadelphia, PA, New York and Massachusetts have hosted the popular presentation. Rosemary was the guest speaker for the Women’s Club Convention at the Golden Nugget in Atlantic City, NJ and entertained an audience of over 100 guests at The General Society of Mechanics & Tradesmen of the City of New York followed by an invitation as guest speaker for The Art Deco Society of New York City. A frequent guest on local radio and television talk shows, Rosemary has appeared on The Tony Guida Show and One To One with Sheryl McCarthy in New York City and NBC’s Sunday Today in NY with Gus Rosendale.

In Saving Radio City Music Hall, published by TurningPointPress, Rosemary Novellino-Mearns reveals how Radio City Music Hall, Art Deco masterpiece and New York City's premiere tourist attraction for generations, was saved from demolition. After years of struggling with intense, sometimes painful memories, "Rosie" tells the honest, fact-filled, emotionally charged, and often humorous story of how she organized the gargantuan effort to save Radio City Music Hall in the Spring of 1978. Against all odds, and in only four months, she succeeded. Readers will be shocked by the "no good deed goes unpunished" climax of the story in which Rosie reveals her reward for spearheading the movement to save "The Showplace of the Nation."

A modest but determined young dancer from Glen Rock, New Jersey, Rosemary Novellino joined the Radio City Music Hall Ballet Company, the classical dance counterpart to the world-famous Rockettes, in 1966. After a shaky beginning, she danced with the group for twelve years, eventually becoming its Dance Captain and Assistant to the legendary choreographer Peter Gennaro. In the mid-1970s, questionable behind-the-scenes changes in Music Hall management alarmed hundreds of employees, but no one was prepared for the official announcement in early 1978, that Radio City Music Hall was slated to close that April and be demolished.

Drawing upon formerly untapped inner strengths, Rosemary refused to let this happen. She became President of "The Showpeople's Committee to Save Radio City Music Hall" and motivated fellow workers, friends, thousands of Radio City fans around the world, New York and national media, cultural leaders and politicians to support the cause. As a result of these efforts, the Art Deco palace was declared a National Historic Landmark. saving not only the building but the jobs and livelihoods of thousands of Music Hall employees on stage and behind the scenes who have entertained millions to this day. This "heartfelt and very personal account of that effort," says Book/lst, "provides a backstage glimpse of the drama that ensued and features a cast of characters that includes performers, politicians, the media, and some very heavy hitters in the world of New York real estate that will delight readers interested in the performing arts and their history in the U.S."

Every time the doors open at Radio City Music Hall, whether it is the “Christmas Spectacular with The Rockettes” or a musical concert, it is especially important to recall the rarely acknowledged fact that, if it hadn't been for the courageous efforts of one young woman and her dedicated colleagues forty years ago in the Spring of 1978, millions of Americans and visitors from around the world in the past four decades would have been deprived of this unforgettable theatrical experience. 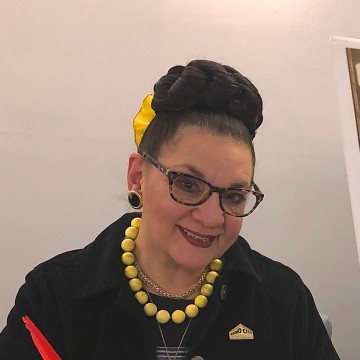 She was the President of “The Showpeople’s Committee To Save Radio City Music Hall.” Her new book SAVING RADIO CITY MUSIC HALL : A Dancer’s True Story, published by TurningPointPress, details this true and surprising story. This is her first book which took several years to write, both emotionally and figuratively.

After leaving the Music Hall, she worked with Broadway choreographer/ director Tony Tanner at Westbury Music Fair and her final professional dancing was in the National Touring Company of Michael Bennett’s “BALLROOM” where she was a featured dancer in the role of Marie.

Since retiring from the dance world she has become a lyricist with her composer husband William Mearns who she met On The Great Stage at Radio City Music Hall where he was a soloist singer. !

Jointly they have written the score three full scale musicals. “EBENEZER” based on Charles Dickens’ “A Christmas Carol” which was given it’s New York City debut Off Broadway and has been done around the country. “A PATCH OF LIFE”, their second show is based on Alice Hagen Rice’s “Mrs. Wiggs Of The Cabbage Patch”. Rosemary and William have completed their third musical, “THE HAUNTED BOOKSHOP” adapted from the novel by Christopher Morley. It has had three Equity Readings here in New York City. !

Rosemary also has a Blog page: “Read What Rosie Wrote” featuring some of her published Non Fiction Short Stories.